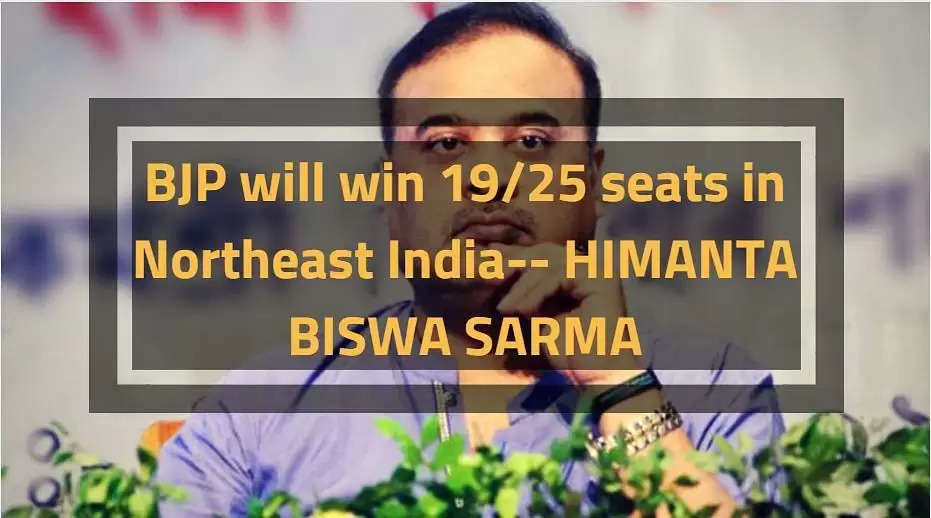 Assam Minister Himanta Biswa Sarma has yet again exuded confidence of securing at least 19/25 seats from Northeast India towards over all NDA tally in 2019 elections. He stated this in a tweet which read as follows:

It may be recalled that earlier in a conversation with India Today Editor Rajdeep Sardesai at the India Today Conclave East 2018 on October 6, Himanta had exuded confidence over the fact that BJP would emerge victorious in 19 out of 25 seats in Northeast India in the coming elections.

Rajdeep Sardesai while taking a dig at the Assam Minister had said that the BJP needs to win big in the East to make up for potential losses it may face in the North and West of the country while shooting a question, "Out of 98 seats between the 8 states of the NE, Bengal and Orissa you had just 11 in 2014. This is your potential area to expand. How many seats will you get in 2019 from Bengal, Orissa and the 8 states of the NE?"

In a reply to Rajdeep's question, Sarma said, "There is no scope of losing any seat in West or North as per my calculation but as far as NE goes, there are 25 seats in Northeast today and BJP is going to win 19 seats and this I can confirm as per my political calculation ".

In a stern reply to Rajdeep's repeated usage of  'BJP manufacturing alliance for majority', Sarma also said that defaming Northeast has become a part of the culture of some political leaders.

Sarma asserted that, "Even if you lock us in one room during or prior to election or accompany me in all of my campaigns, we will still come out with 19/25 seats. The end result will remain the same no matter what because nothing is 'manufactured'. This has been made possible because people in Northeast had never expected that Jiribam-Imphal highway (Manipur) would ever be a reality, that the highest airport in Sikkim would ever be operational or that after 60 years, people of Tripura would be seeing broad gauge railways — this is the reality of BJP in NE".

He also asked opposition party to not try to defame BJP on baseless grounds because he said, "If we bring out issues like the suicide note of Kalikho Pul (Former Arunachal Pradesh CM) because if you read his note he has been seen to blame the entire generation of Congress leaders for his suicide. But let us not dwell on the past now".

Clarifying on the repeated usage of the word 'Defection' by Rajdeep, the Assam Minister said, " Rajdeep, you are so senior so please do not use words like 'defection' is happening in the Northeast. This is not fair for the image of Northeast. Let me clear out that there is no defection but every person in politics has the right to exercise their choice/s and this is what happens everywhere and not only in Northeast".