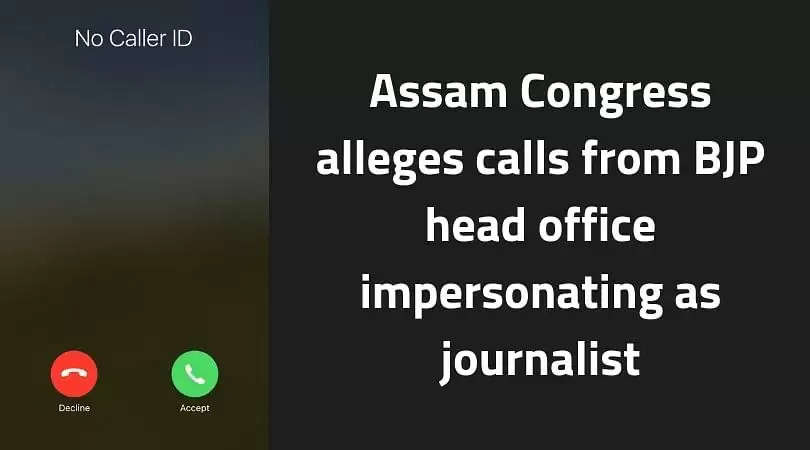 Assam Congress claimed on Saturday that it had traced to the BJP head office in Delhi the calls from a person, who posed as a TV news channel journalist, to some of its leaders and alleged it was an attempt by the saffron party "to fabricate fake news" against it.

The state BJP dismissed the allegations, saying reporters who come to BJP offices sometimes use the phones there and alleged that Congress is raising non-issues as it is losing ground.

A press release by the Assam Pradesh Congress Committee (APCC) claimed the person had called up Bobbeeta Sharma, the general secretary and senior spokesperson of Assam PCC, on September 21 and had introduced himself as a journalist of a popular English news TV channel,

He had sought information about East Guwahati constituency from where Sharma was a candidate in the 2016 state assembly election as well as the neighbouring seats of Dispur, West Guwahati, Jalukbari, Palasbari and Hajo, the release by Sharma said.

"The Assam Congress party has taken strong exception to the impersonation incidents of the caller from the BJP party office from Delhi and will also lodge a complaint with the state police department," Sharma said.

The Congress spokesperson also released the numbers from which she had allegedly got the call from Delhi on her mobile phone on the afternoon of September 21. The caller had introduced himself as Robin and a journalist of a popular English TV news channel.

The person had told Sharma that the information was sought in connection with an exit poll for the 2019 Lok Sabha election, she said.

The numbers from which the calls were made were checked from the MTNL directory in the internet and were found to be those of the BJP office in 11 Ashoka Road Delhi, she claimed.

Charging the BJP with making the alleged calls, Sharma said in the release, "The Assam Pradesh Congress Committee has condemned the alleged action of BJP for using callers in Delhi to impersonate as television journalists of national news TV channels and gather information from Congress leaders in Assam."

She said, "The Assam Congress apprehends the purpose behind such calls could be to record voice samples of Congress leaders to manufacture and fabricate fake news and hate news which is the forte of the Bharatiya Janata Party to be used later during election time".

The APCC spokesperson said the Congress condemns the use of "young boys as pawns to indulge in such unethical, nefarious and anti-national activities and ruining their future prospects".

Asked about the allegations, Assam BJP spokesman Rupam Goswami told PTI that he was not aware of the incident.

"Many reporters come to BJP offices across the country and use the phones in the party's offices for the purpose of news gathering. This may have been one such incident," he, however, said.

Goswami also said that "as Congress is losing ground, it is raising such non-issues instead of concentrating on bigger challenges facing the country".