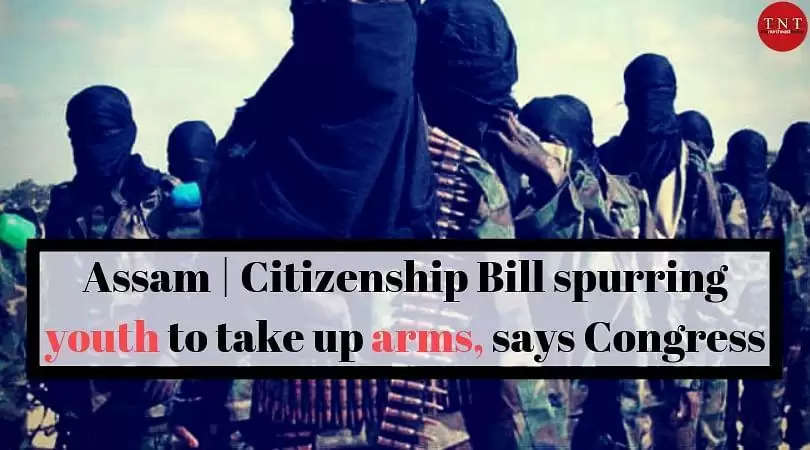 The Congress on Wednesday said that the admission by the Assam's police brass that the Citizenship (Amendment) Bill 2016 was spurring the youth to take up arms proved the BJP government's failure to protect the state's interest.

Director General (Special Branch) of Assam Police and the Superintendent of Police, Tinsukia, and other senior police officials recently said that the resentment against the Bill has driven some youngsters of the Brahmaputra Valley to join the anti-talk United Liberation Front of Asom (ULFA) faction led by Paresh Baruah.

"The ULFA's popularity had gradually waned during the decade-and-a-half when the Congress was in power in the state. But the Narendra Modi-led central government's decision to table the controversial Bill and the Sarbananda Sonowal-led state government's failure to mount a strong opposition to the proposed legislation are inducing a section of young boys and girls to take up arms against the state," Congress leader Debabrata Saikia, who is the leader of the Opposition in the Assam Legislative Assembly, said in a statement.

He said that dwindling employment opportunities and stagnation of development activities like the MGNREGA are also creating frustration and resentment among many youth, who are gravitating towards the ULFA faction.

Referring to the all-round failure of the BJP government in the state, Saikia said that although the CM keeps talking about "zero tolerance of corruption", yet he has been unable to muster the courage to conduct a CBI inquiry into the widespread reports of several syndicates operating in the state to smuggle coal, stone, sand, and 'supari' (dried areca nut).

"Similarly, the Chief Minister has remained a helpless spectator to the woes of the health sector, including serial crib deaths in the medical colleges-cum-hospitals in Barpeta and Jorhat and the supply of contaminated medicines by certain parties, a fact which the government admitted in the House," he said.