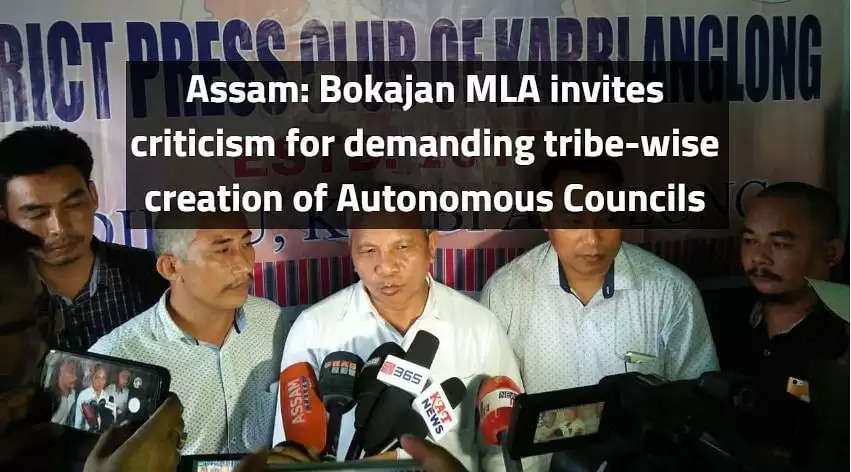 Diphu: The Joint Action Committee for Autonomous State (JACAS) has strongly criticized  No.17 LAC Bokajan constituency, MLA Dr. Numal Momin regarding the letter addressed to Governor of Assam Jagadish Mukhi urging him to implement Article 244 (2) of the Indian constitution for creation of tribe wise Autonomous Regional Councils and Autonomous Village Councils in the 6th schedule areas of Karbi Anglong and demanded that no administrative changes should be made before the Autonomous State is granted.

In a press conference held here at the office of District Press Club of Karbi Anglong on Thursday where a copy of the letter to the Governor submitted by Dr. Monin was made available to media persons, the  JACAS Chairman Khorsing Teron alleged that Dr. Momin on May 5, 2018 submitted a letter to Governor of Assam reminding him of the delay in the implementation of Article 244 (2) of the constitution for creation of tribe wise Autonomous Regional Councils in Karbi Anglong.

The letter addressed to the Governor by Dr. Momin states —- " Regarding the long delay in the implementation application and enforcement of the provision of the Article 244 (2)  of the constitution of India in the matter in the matter of the creation of the  Tribes wise Autonomous Regional Councils and Autonomous Village Councils in the 6th schedule areas of Karbi Anglong district in Assam to decentralize powers at the grass roots levels and empower the following schedule tribes i.e. Man (Tai speaking), Garo, Kuki, Rengma Naga, Tiwa, Khasi Jaintia and Dimasa Kachari."

The BJP government stand for the 'Sab ka Sath Sab ka vikas' principle and the slogan embrace the political and economic sharing of all tribes.

As a consequence public resentment is brewing and also blamed the then Congress government for duping the public of the 6th schedule areas of the district. Various communal clashes between different tribal groups were witnessed and need to check the future recurrence by devolution of political powers at regional and village level, the letter said.

Dr. Momin blamed Hills Area Development (HAD) department, Dispur, government of Assam for the "deliberate neglect" and inaction of the officials of HAD department for decentralization of powers to all tribes in Regional and Village Councils is pending since long.

"In order to activate the lethargic HAD department officials I earnestly request you to issue necessary instruction to HAD department to collect the map of the tribes wise area for division of the areas into regional, village names and map, language, culture, dress, religion, rituals, economic, standard, festivals, tradition, chief system etc."

Expressing serious concern JACAS Chairman, Khorsing Teron said, "No administrative changes should be made until and unless Autonomous State is formed as provided under Article 244 (A) of the constitution."

"Dr. Momin's advice to the Governor to create Regional Councils cannot be accepted at this point of time. Devolution of powers to the lower level can only be possible when the present Autonomous Council is elevated to the status of an Autonomous State or Separate State and adequate powers is developed upon the new political and administrative setup. Dr. Momin, who brags about his raising Autonomous State issue in the Assembly should have advised the Governor for early implementation of Article 244 (A) so that all the indigenous tribes of this particular hill areas can have their due share in the new political and administrative setup," Teron said.

Teron blamed the State government for not nominating unrepresented tribes to the KAAC even after completion of one year of the present tenure of the Council. Unrepresented tribes namely Rengma, Kuki, Man (Tai speaking), Garo and Khasi Pnar should and could have been nominated to the Council much earlier, Teron stated.

Referring to clashes by different tribal groups is an impropriety on the part of Dr. Momin as he is indirectly encouraging repetition of the unsavory incidents, Teron said. Moreover, Teron also said, "Dr.Momin is a public elected representative, he should not say anything that can create another unsavory incident in the district. Teron urged "the BJP leaders to do the enquiry in the matter and take necessary action in order to avoid unnecessary situation in Karbi Anglong"

Image courtesy: Leaders of JACAS while addressing to the media persons at District Press Club of Karbi Anglong on Sept.20, Thursday.