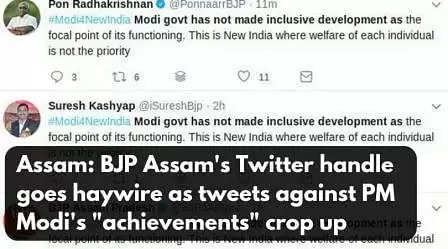 GUWAHATI: In a strange incident, a regional news website Guwahati Plus has reported that a number of coordinated tweets from BJP Ministers and state party accounts were posted on the official Twitter handle of BJP Assam that were antonymous of what they were trying to say.

Among these accounts was the official Twitter account of BJP Assam Pradesh (@BJP4Assam) that was also a victim of this error. Their account tweeted that the "Modi govt has not made inclusive development as the focal point of its functioning. This is New India where the welfare of each individual is not the priority."