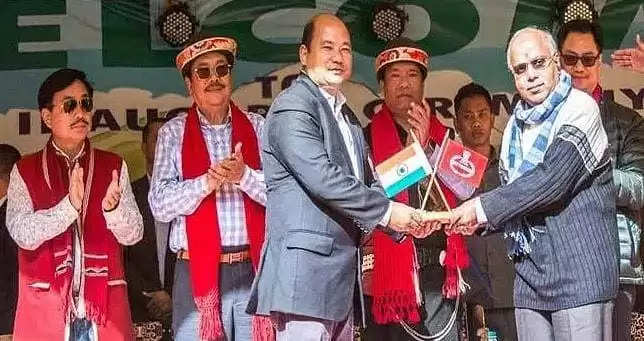 ITANAGAR, December 10, 2018: Arunachal Pradesh got its 23rd district on Sunday with the formal inauguration of Shi Yomi, carved out of the West Siang district, officials said.

Two more districts would be created, which would increase the total number of districts to 25, they said.

Additional Deputy Commissioner of Mechuka read out the notification for creation of Shi Yomi district in presence of Chief Minister Pema Khandu and Union Minister of State for Home Kiren Rijiju, an official release said.

"The district, consisting of four circles — Mechuka, Pidi, Tato and Monigong — was carved out of West Siang district," Khandu said.

Owing to its large geographical area, inaccessible terrains and the district headquarters Aalo being far from these four circles, the State Assembly gave its nod to the creation of the new district, he said.

The Arunachal Pradesh Assembly had on August 29 passed a bill for the creation of three new districts — Pakke-Kesang, Lepa Rada and Shi Yomi.