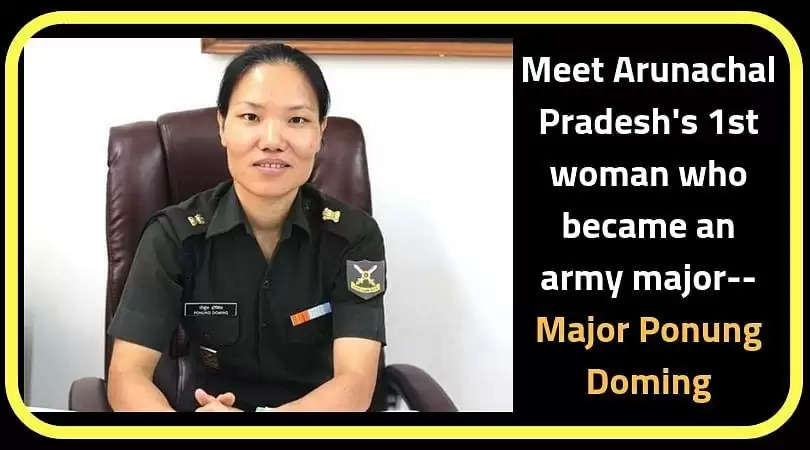 Northeast India has given many reasons for the nation to be proud of itself and time and again women from the 8 states have proved that with will, determination and hardwork, nothing is impossible.

Today we bring to you the story of Major Ponung Doming, who became first army major from Arunachal Pradesh.

Major Ponung Doming, eldest daughter among four siblings of Shri Olom Doming and Smti Jimmi Dai Doming from GTC, Pasighat made the entire state proud by getting inducted into army and became first army major from the state. But she never dreamt of becoming an army officer during her school days, says major Doming during an interview.

She did her schooling from Govt. Daying Ering Higher Secondary School (Class X) and IGJ Govt Hr. Sec. School Pasighat (Class XII) where she topped among tribals. She then did her civil engineering from Walchand College of Engineering, Maharastra during 2001-05 after clearing entrance examination. Her interest in joining Indian Army budded during college days, but owing to non completion of course, she didn't. After her engineering, she got placement in one of the leading MNC, L & T Company, Kolkata where she worked for around 2 years until she could accumulate some money to get herself prepared for the Service Selection Board, Allahabad where she appeared the exam. It was during the year 2008 when she made it into army and joined Officers Training Academy, Chennai. After her getting inducted into Army as Lieutenant in September 2008, she rose to the position of the Major within four and half years. And within a short period of her service, she was deputed in the United Nations Peace Keeping Force mission during April 2014 at Democratic Republic of Congo. Major Ponung says that it is a rare chance for an army to get deputed in the UNPKF Mission who is selected after seeing the good service records.

On the question of whether she faced any hardship or encounter from rebellion group at Congo, Major Doming said that fortunately such situation was not faced though Congo was a disturbed country. Her duty was divided into six months into two tenures. During the first six months, she was posted as military observer whose duty was to observe the security situation at Congo and to oversee any human right violation by any local authorities like force enforcement authority, availability of schools and colleges, medical facilities etc.

"The group of officers selected one each from each representing country, like in our group we were one each from India, Malaysia, Ghana, South Africa and Tanzania which is a rainbow concept," shared Major Doming.

In the next six months she was among the team of 27 officers who were responsible for conducting the discipline of entire troupes which was no less a tough job. There were nineteen thousand and seven hundreds military forces in the Congo. And on the question of how she could manage the discipline of such huge numbers of forces, she said that, "problems are all around, it's the attitude that matters". It was indeed a tough job, but we divided it among us and carried out our responsibilities dedicatedly which worked well. On her experience as an army officer getting posted at UNPK mission, major Doming said that, 'it was truly a liberating and learning experience serving in UN peace keeping mission at Democratic Republic of Congo representing Arunachal Pradesh in particular and India as a whole'.

A very down to earth by nature, Major Ponung Doming is an inspiration for many today. When asked if she has any advices for the younger generation especially, girls who are intending to make way into army like her, she said; "my advice to young aspirants of our home state and the region is, dream big and above all, have the courage to achieve or fulfil that." On being flooded with young aspirants taking her suggestion online as she has become an inspiration for many, she said, 'I will consider myself blessed, if am able to inspire even a single person to do whatever little we can do for our country.'