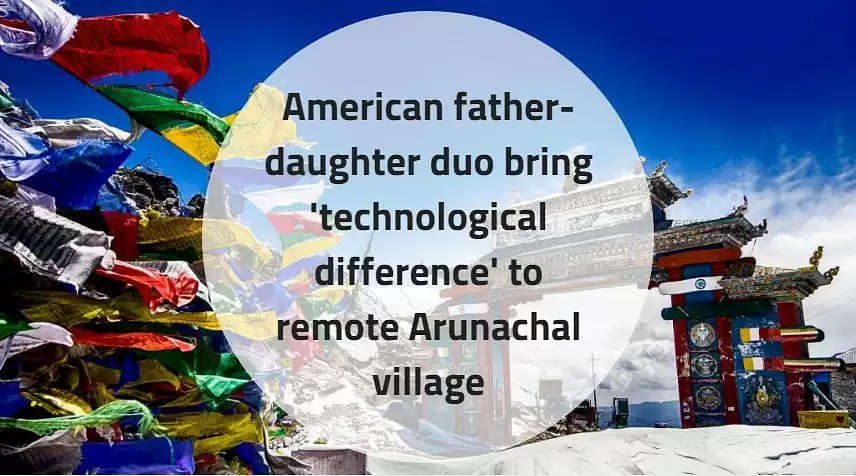 National Geographic explorer Mike Libecki and his 14-year-old daughter Lilliana are essentially travellers who have been to several remote corners of the world. But it is not just the high-ranging mountains or far-flung seas that have a distinct pull for the American father-daughter duo; in fact, most of their travels are humanitarian- and- philanthropy-based expeditions.

In their latest venture, they collaborated with Dell as a part of its Give Back Project and worked in a remote village of Tawang in Arunachal Pradesh.

At Jhamtse Gatsal's Children's Community, which is home to about 90 children, the father-daughter duo, along with Dell employees, have installed 20 new laptops, new printers, internet access and are imparting computer education to kids and teachers in Tawang.

They have also installed new solar power panels and solar generators for the computer centre and other buildings in the community.

"We worked closely with the community. All of the kids at the community are orphans or they have come to live there because they have family issues. They are all first-generation learners, none of the families of these kids have had an education.

"We came here to provide solar energy, a new computer lab with computers and internet installed, because the goal of the orphanage is to provide education to the kids. They want the children to go to college; without having computers and internet, they will lag behind and not be able to do. In the times that we live in, we need to be technologically advanced and savvy to make progress," Mike told this agency.

Maintaining that progress is not possible without access to technological tools such as computers and the internet, Mike explained that all the equipment was shipped from the United States to Tawang and Dell employees were on ground to help in the installation process.

"But just installing the computers wasn't enough. We needed to ensure that the children are able to use them… that they are trained properly and, whenever the situation arises, they should have help from technicians. We also had to ensure that these systems run on solar power because remote areas like these do not have electricity running most of the times," he said.

And so when they set out on what turned out to be a very enriching and satisfying experience, there was a lot of anticipation in the air as many of the kids at Jhamtse Gatsal's Children's Community were seeing computers for the first time.

When the young children saw Lilliana, who at the age of 14 has already been to 26 countries, all seven continents, five major expeditions and has climbed Mt. Kilimanjaro in Africa, helping her father set up the computers and teach not just the kids but also the teachers and other workers at the community on how to go about using the computer and accessing the internet, their faces lit up with brightness and, in Mike's words, "They learnt to aspire."

"Everytime we connect with a community and we try to give back, we get more than we give. We have opportunities that they don't and making a little impact on their lives really leaves us with a great feeling of satisfaction. We are giving them computers and internet.

"Think about you and I, we have access to these technological boons but we take it for granted every day. We never think what our lives would be had we been unfortunate too. We just have these at our disposal. So why should other human beings not have them too?" he asked.

Mike said that just like the word "technology" comes from the word "tool", they envisaged a similar approach towards this project.

"We are using technology as a tool. These kids want to go to college, just like anybody else. Why shouldn't the most remote and poor kids have the same opportunity that you and I have? So we want to do our part. If we are doing our part and impacting one community may be we are impacting thousands of people because initiatives like these create a ripple effect. The one who has been benefited will, some day, if he/she has an opportunity to, make a difference in the lives of others," Mike said.

Jhamtse Gatsal's Children's Community is located in Tawang district of Arunachal Pradesh. The nearest town is Lumla, less than half an hour away by car, or an hour or two by foot. It is a community, a school, and a home for about 90 children ranging in age from toddler to adolescent.

Most of the children at the community have a background of adversity and the driving goal of the community is to provide these children with better lives, helping them to achieve their fullest potential.

(The weekly feature series is part of a positive-journalism project of IANS and the Frank Islam Foundation. Saket Suman can be contacted at saket.s@ians.in