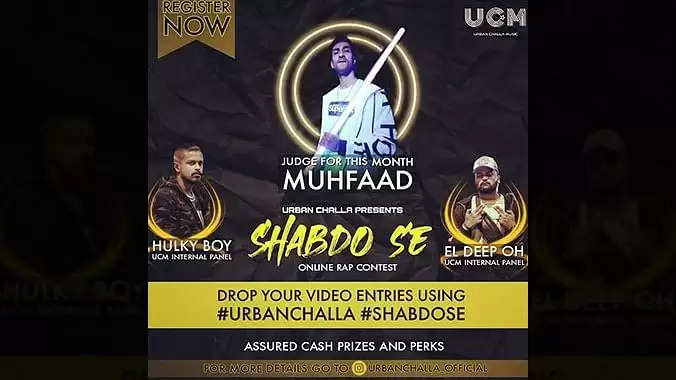 A rap contest is being organised by the Urban Challa Music (UCM) under the theme "Shabdose", inviting rappers from across the nation.

The weekly online rap contest is being held "with the sole aim of uplifting every boy or girl with the potential to rap".

Leo Boys, who are the artists of Urban Challa music, are a part of this competition as the internal panel members.

"UCM plans to make the second season reach a wider audience group as we are sure that there are thousands, if not millions, of people in our country who think that they can rap. For the first month of this contest, Muhfaad will be the judge," said one of the organisers.

"Being a pioneer in the Indian Hip Hop scene, with a genuine wish to uplift the hip hop scenario in our country, Muhfaad's presence amongst the young rappers will not only motivate and influence them but will also encourage them to put forth their best efforts in this competition."

The top three qualifiers for every week will be rewarded cash prizes.

The organisers will provide beats every week for the entries.

"Shabdose aims at uplifting the rappers who have nothing but their talent with them," added the organisers.