Up close & personal with Not Funny, a young band from Manipur 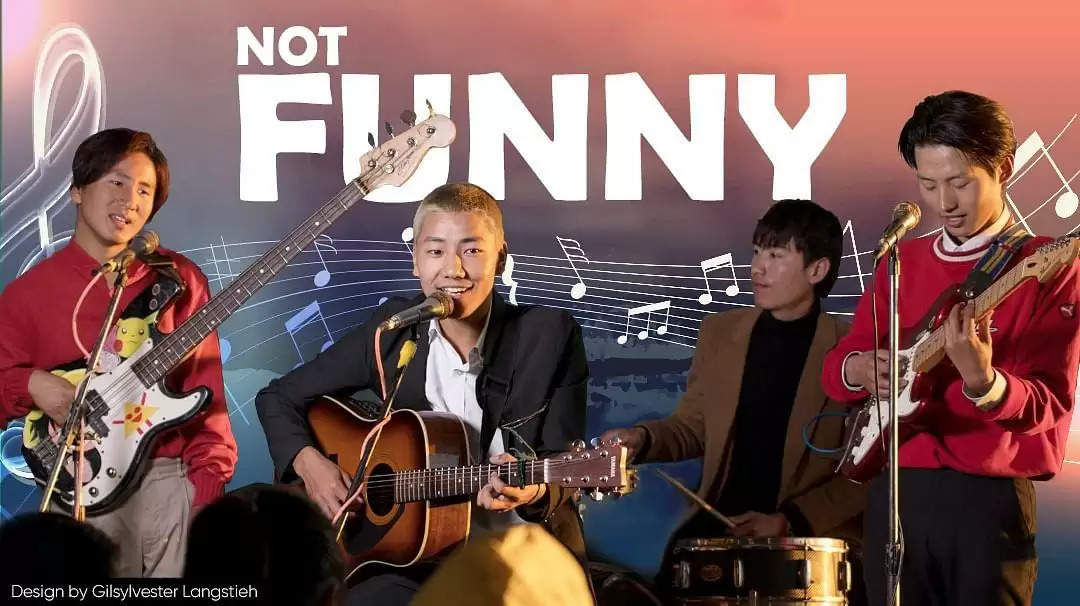 The growth of the music industry in the northeastern state of Manipur is apparent from the number of talented bands and young artists that have multiplied over the years.

One such young band all the way from the hills of Manipur is "Not Funny", founded in 2019.

They made their presence felt around six months ago with their first music video called "Dance With Me" which has garnered over 80K views on YouTube.

Initially, the members were associated with different bands but eventually, they decided to come together, to compete in a competition called 'Manipur Idol 2019'.

Doesn't it sound like the way Simon Cowell forms bands in the show, 'X-Factor'? Interesting, isn't it? But the fascinating part lies in its name "Not Funny".

Speaking to TNT-The Northeast Today, the band shared the reason behind the choice of this name. They said, "The story is actually candid. It happened right after our band's photoshoot when we found out that our drummer Wotsa looked awkward in the photo and, it ended up being circulated in our WhatsApp statuses. And when the photo received funny reactions, our vocalist Wungramthing said it was 'NOT FUNNY'. That reaction just clicked and, that was when we decided that we would call ourselves the NOT FUNNY BAND".

The band consists of four members. They include:

According to the team, he is the ice-breaker of the band. "He has a very soft character, and this is also the reason why he is one of our lead lyricists. He is good with electrical works so, you know who does all the faulty fixings in the band," they added.

He is the most "punctual" one in the group. The band did not spare him when it came to his introduction. They said, "He looks skinny, but he could eat an elephant. We are still wondering where all the food goes! He is also our informal Stylist and the most fashionable in the lot".

He is known for being a conversationist and, the band addresses him as their spokesperson. "But you'd probably find him sleeping everywhere, at jam sessions or even before and after a gig!" said the team.

He is said to be the heartthrob of NOT FUNNY. The group describes him as the "popular one" who barely laughs but is known for his dance and handicrafts.

The band has so far released two songs, 'Dance with me' (2020) and 'Unfamiliar feelings' (2021). According to the band, the first song (Dance with Me) explores the unsaid feelings and, the imagination of their mind. And the second song (Unfamiliar Feelings) explores love at first sight and the stirred-up feelings in people by their first love(s).

The band that is known to have a "funny" story behind everything also had something to reveal about 'Unfamiliar Feelings'.

"Funny thing is, 'Unfamiliar Feelings' wasn’t supposed to be released. It just so happened that when we were jamming on a different song that was supposed to be released as our second single, our vocalist decided to hum unfamiliar feelings. And we liked the beat and, immediately, we knew that this was going to be IT," they said.

They used colour-popping props and abstract items to form a storyline in the video with each member’s characters beautifully imbibed in it.

The speciality of their music is that it mainly focusses on the beats and lyrics and give every song a funky vibe.

Not Funny has not released an album yet but are currently working on their new song 'Walk Through' which the band described as "finding hope at the worst of our times, and how it is only through the pain that we learn to celebrate life and love" and, they're hopeful for this music release to open doors for the band on a bigger platform.

The band aims to attract young and old music lovers. Their main motive is to bring something new to the music scene in Northeast India by embracing the "less picked Indie Pop Rock genre".

Finance always becomes one of the hindrances when it comes to producing a well-packaged music video. For their second song release, Not Funny Band busked in the streets to raise funds.

"Through this, we wanted to show everyone that when you have the will, you can do just anything. You just have to be determined enough to achieve your goal," the group mentioned.

Formed in 2019, the band had very little to no time to perform on different platforms because the "dreaded" COVID-19 pandemic that hit the world forced everybody to shut themselves behind closed doors.

"Before the lockdown, we had show bookings for music fests such as Sangai Festival, ZIRO festival and Miss Spring. Our achievements would be winning the Ringui’s Got Talent in 2020, and being awarded the Best Composition and Lyrics at Manipur Idol 2019".

The band's message to the readers and viewers of TNT:

We have seen so many artists before us basking in the glory of music and going astray after a few years. We want to show everyone that we are different, and artistes can be different. And we want to show it through our lives. Through our songs and the band, we want to remind everyone that we must live our passion instead of forcing ourselves to do something that we are not passionate about.