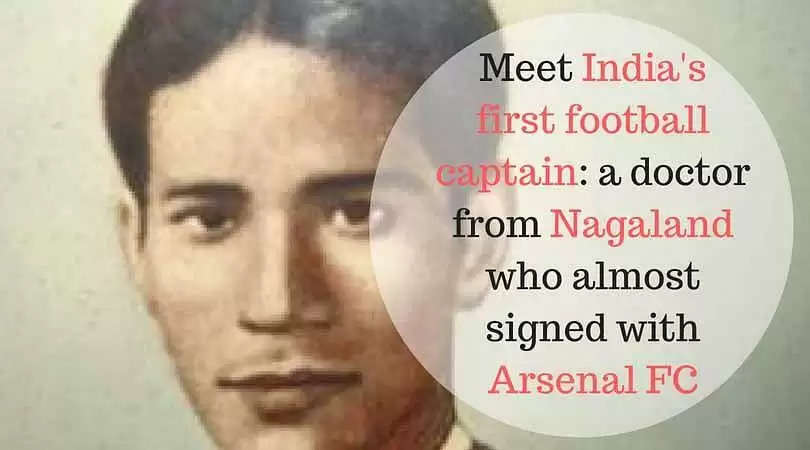 KOHIMA, July 16, 2018: It is a little known fact that the first captain of the Indian football team was from the north-eastern state of Nagaland.

Fondly known as T Ao, or Tay Ao, or Dr Tay, Talimeren Ao was the first captain of the Indian football team in the year 1948. He was born in 1918 in Changki, a village in the then Naga Hills district of Assam, and now in Nagaland's Mokokchung district. His father, Subongwati Ningdangri, was the first Reverend in the Naga Hills.

Besides his captain-ship in the Indian Football Team, Talimeren Ao was also captain of Mohun Bagan and the flag-bearer of the Indian Olympic contingent at the 1948 London Games.

Dr Talimeren Ao is hailed as the region's first footballing hero. He was a dominating midfielder and defender for nine seasons at Mohun Bagan, from 1943 to 1952. He even played in the same team as Sailen Manna and Taj Mohammed at the London Olympics.

Two or three years after T Ao was born, his father, died of typhoid.

In 1933, T Ao was sent to the Jorhat Mission School where he was first exposed to proper football.

After an incredibly successful stint at Maharana Club, Ao's old friend the club, Sarat Das, who was then playing for Mohun Bagan, brought him over to the legendary West Bengal Club as a defender, eventually earning himself a captaincy.

What immediately followed was an induction into the Indian National Team, where he was again chosen to be captain. During this period, he led the Indian squad to the 1948 London Olympics, which were held after a gap of 14 years due to the Second World War.

At the Olympics, the Indian team advanced till they met France, who beat them 2-1.

According to Scroll, Arsenal even offered him a contract, but he chose to return to his studies and then home to Nagaland instead.

Talimeren returned home after his graduation in 1950 to Nagaland and joined the Kohima Civil Hospital as an Assistant Civil Surgeon in 1953. He stayed there until he retired as the Director of Health Services in Nagaland in 1978.

He passed away in 1998 at the ripe old age of 80 and was buried at the Naga Cemetary in Khermahal, Dimapur. Ao has been honoured with an outdoor stadium in Koliabor near Nagaon and an indoor stadium in Cotton College Guwahati named after him.