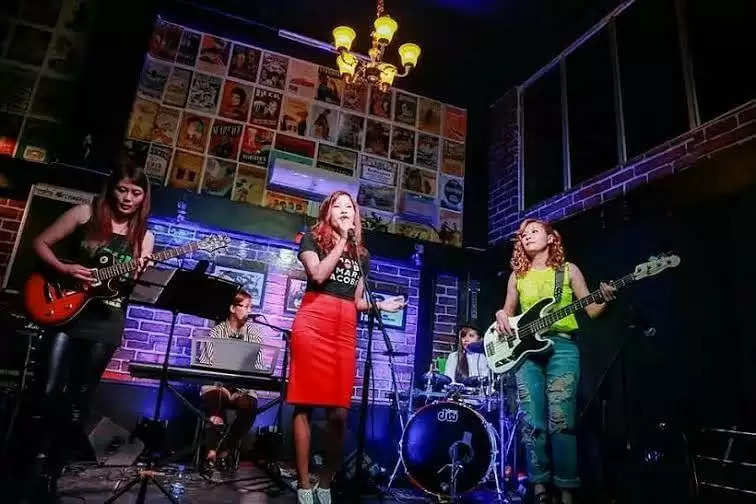 Vivace is an all-female band hailing from Dimapur, Nagaland. The band was formed on 25th November 2013.

The band's style of playing is considered to have a blend of pop rock, and Indie, so they call themselves an experimental Pop/Indie rock band, who plays for the passion, the joy and to uplift and empower women in the state.

One of their main objectives to form a band is to show the world that girls can play an instrument too and to make use of their talents. Since their inception in 2013, they've released their Debut EP Dream Out Loud in 2014.

Today we have Livika Swu with TNT – The Northeast today Magazine who willingly accepted to share some insights about the band. Below is the Interview:

TNT. Hello Livika, greetings from TNT. May I have your introduction?

LIVIKA: Hi! Thank you so much for having me. I'm Livika Swu, the front-woman of VIVACE-Naga Girls band from Dimapur Nagaland.

We are inspired by bands like Purple Fusion, Polar Lights, Tetseo Sisters from Nagaland and a Japanese girls-band Scandals and I should say wow! These girls are amazing and they motivated us to gain confidence.

TNT. How and when was the band formed? When was your first gig?

LIVIKA:  Our band was first launched at the School of Music & Arts, Purana bazaar on November 25th 2013. We were all strangers then. Our promoter Mr. Mhonyamo Kikon, the proprietor of School of Music and Arts has been observing us since day one and it was him who truly noticed our talents and bought us here together as a full-time band. Without him none of this could have been possible.

TNT. How would you describe your musical genre?

LIVIKA:  When it comes to our style of music, we don't like to categorise our style as a specific genre because we believe that music has no such boundaries or specific limits. We play music for the joy, passion, and the fun of it.  We love experimenting and blending with different types of music together. We love pop music, Indie, gospel, Rock, and so on. So yes, we're an experimental Pop/Indie band.

TNT. Had any big performances?

LIVIKA: Yes! We had a privilege to perform during the Hornbill festival 2014 as a guest band representing our state along with different other talented artistes from other states

TNT. Tell me when you write songs, what theme do you specifically stress on?

LIVIKA: Our objective with our music is to specifically stress upon women's empowerment in the society and the youth of today's society

TNT. As you can see nowadays there are a number of upcoming All-female bands and you're one of them, how does society respond to you? And how's the support so far?

LIVIKA: Yes, thank you for the question, we are very honoured and proud to be one of the all female bands from the Northeast and we are happy to see our society supporting us in every way and I want to thank them for supporting us this far. Being a woman in any field is not very easy but if you put an effort as your passion allows, I believe nothing is impossible, that's what we believe, and we're just simply empathetic towards the people who have been supporting us since day one. No matter what people say or criticise us we will never stop following our passion because we have the support we needed the most.

TNT. Unfortunately you told me that your single track was lost in a phone formatting, any plans in recording it again and release? Your Debut EP?

LIVIKA: Oh yes! Sadly that happened but we will definitely record it again in the coming months, fingers crossed. Keep yourself updated with the band page on Facebook. Our debut EP Dream Out Loud was released last year on 9th August, Jumping Café at Dimapur, Nagaland

TNT. Has the band's lineup changed?

LIVIKA: Yes, we have a new member in the family, Rebecca. Rebecca is now the official member behind the kit in Vivace camp. We've never had an official drummer and now we do. Vivace line-up is completed with her inception in the band.

Vivace comprises of Onen Nenty on bass, Nekshinaro Imchen on guitar, Vekutalu Swuro on keyboard, Rebecca on drums, and I front the band.

TNT. Last question, what would you say to the people who haven't heard of the band before, what would like them to know about the band, what's your message? Thank you Livika! You've been great!

LIVIKA: Hello, beautiful people of Northeast! We are Vivace Naga Girls from Dimapur, Nagaland. We are an all-female band that plays music for the passion and we believe that music can cure a broken heart. We're an experimental pop/indie rock band. As a band we aspire to encourage the youth of today to follow their dreams. You can check out our Debut EP Dream Out Loud, and we hope you'll like us musically. Support us, we don't want publicity but we just want to play good music.

Support us! THANK YOU TNT!

TNT wishes them the best!