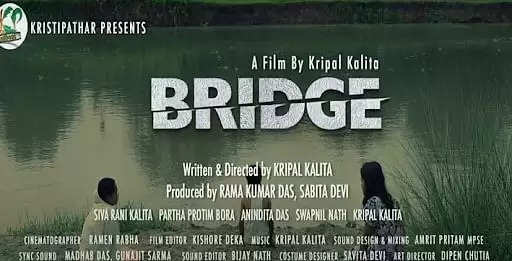 An Assamese film on the annual problem of floods in Assam bagged the special mention award at the 51st International Film Festival of India (IFFI) in Goa on Sunday.

'Bridge' directed by Kripal Kalita, is, in fact, the first Assamese film to bag an award in the international competition of IFFI.

Back in 1996, an Assamese film, Adajya, directed by Santwana Bardoloi, had received the jury award in the Asian category of the festival.

Set in the backdrop of Sonarichapori in Upper Assam’s Dhakuakhana, the film depicts the struggles of a teenage girl living along the bank of a tributary of the Brahmaputra river in the absence of a bridge and amid perennial floods.

“Every year during the monsoon, the rising water of the Brahmaputra and its tributaries wash away many villages and cause immense hardships to people across the state. So in the film, I have tried to portray the struggles of a girl, Jonaki, amid floods with the lack of a bridge over the river compounding her woes. He father dies in floods, her brother struggles to go to school wading through the deluge, and then, her marriage cannot materialise because there is no connectivity to her village,” Kalita said.

“This is my first film, and the inspiration comes from the fact that I wanted to make a film on an issue which I have been affected by since my childhood. I grew up in Tamulpur (Baksa district) and have seen how floods affect people every year. Worse still, the absence of basic amenities such as bridges keeps people in the interiors disconnected from the mainland. Because of poor connectivity, people are deprived of proper education and healthcare,” he said.

An independent filmmaker with a theatre background, Kalita started shooting the film in May 2018 with a new cast and crew.

He completed the movie with a limited budget of Rs 32 lakh in February 2020, just before the COVID-triggered lockdown in Assam.

Thereafter, finding distributors became a problem because of the ongoing pandemic.

On the cast, the 43-year-old filmmaker said that he did a lot of research on finding the movie’s protagonist, Jonaki.

“I did not want to take established actors. So I visited villages and did screen tests on about 300 girls before finally finding the right person (Shiva Rani Kalita),” he said.

Kalita hoped he could send a powerful message through the film. “I want floods to be declared a national problem. As of now, a solution looks difficult even as I am still optimistic,” he said.