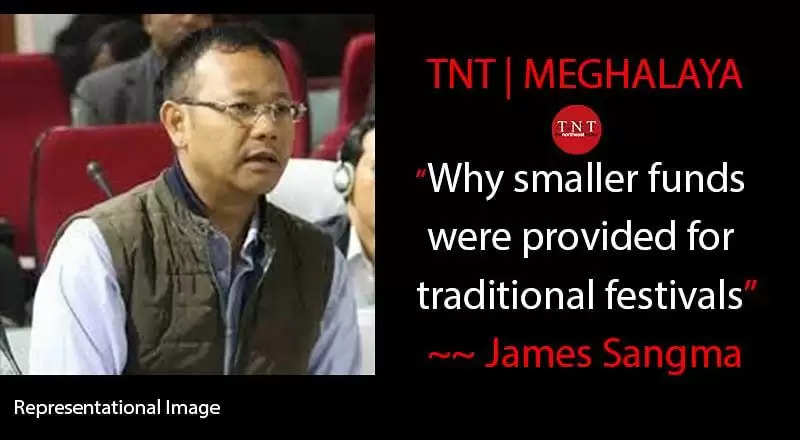 Tura, Nov 11, 2017: With the MUA II government already in the line of fire for organizing a Cherry Blossom festival at a time when none of the trees are blooming, NPP leader and Dadenggre MLA, James K Sangma fired salvo at the government and questioned the difference in funds provided to indigenous festivals when compared to festivals like 'Cherry Blossom' organized by the state.

Garo Hills currently is in the grip of its biggest festival 'Wangala' which will end tomorrow after the combined beating of a 100 traditional drums. The chief minister, Dr Mukul Sangma is expected to be the chief guest for the event tomorrow.

Speaking at the festival on Friday, James questioned the difference in funding while questioning "Why smaller funds were provided for traditional festivals?"

ALSO READ: 5 facts to know about the '100 Drums or Wangala Festival' of Meghalaya!

The NPP leader pointed to the fact that the Cherry Blossom festival last year had cost a whooping 91 lakhs and the same has gone beyond a crore this year.

"While such a huge amount is spent for the Cherry Blossom festival, yet, for Khasi, Jaintia and Garo traditional festivals, only Rs 25 lakh was released by the government. I would appeal to the government to provide equal funding for the traditional celebrations also," said James while expressing his displeasure over the large scale difference in the funding pattern.