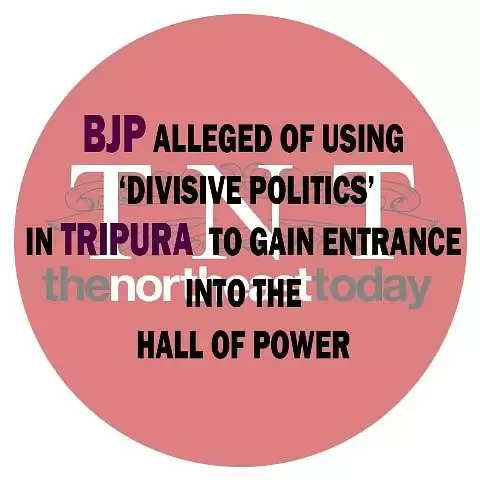 Agartala, July 08: Launching an attack on the BJP for its alleged intention to divide Tripura based on ethnicity, the Left students and youth organisations of the state on Friday organised a mass rally to protest against the BJP's 'divisive politics'.

Addressing a massive rally in protest of IPFT's announced agitation of road and rail blockade on July 10, four left students and youth organizations – DYFI, TYF, SFI and TSU today organized a massive rally at Agartala, DYFI general secretary Amal Chakraborty said that BJP was trying to make backdoor entry into power in Tripura in the model of other states like Goa or Manipur.

"They are using divisive forces in the state and threatening us with the power of centre. These power-centric blackmailing wouldn't work in Tripura", he said.

The rally of at least 5,000 people started from the entrance of Rabindra Shatabarshiki Bhawan here and ended in a mass gathering near Orient Chowmuhani.

Addressing the gathering, the speakers said that IPFT was working closely with the communal forces for creating political turbulence in Tripura.

"They (IPFT) returned from a meeting with the PMO and announced a most unsolicited agenda of rail and road blockade. Such divisive forces have been trying to make backdoor entry into power since decades by threatening with power of the centre", DYFI leader Amal Chakraborty said.

He added that people of Tripura have learnt enough in their struggle with secessionist forces. Such threats of central power wouldn't work in the state, Chakraborty said.

He came down heavily on BJP's politics of getting leaders across opposition parties irrespective of ideological differences or plethora of wrongdoings that might exist in their political career.

"Politics in Tripura had a certain culture of dignity and respect. BJP has completely destroyed this culture by pulling people who have been repeated turncoats without remorse", said Amal.

He launched a scathing attack on Governor Tathagata Roy over the series of controversial tweets. "Someone who occupies the highest Constitutional post in the state has been inciting people over religious and communal lines. What will the youngsters of Tripura learn from them?" a livid Chakraborty shot.

By Our Correspondent (TNT News)