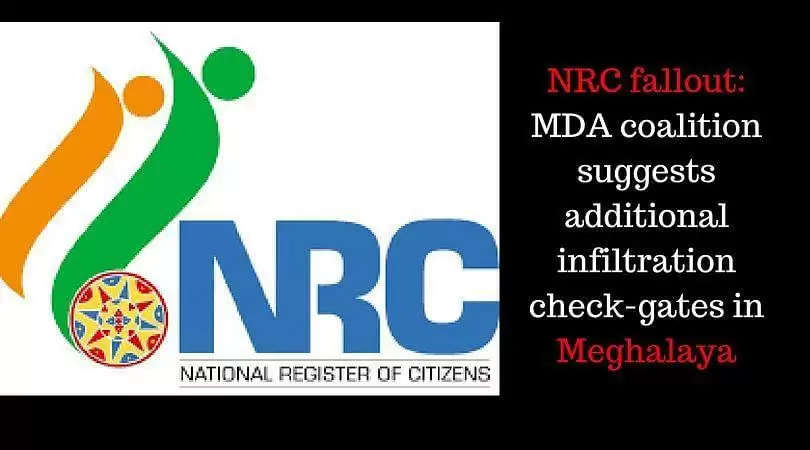 Following the fall of the publication of the final draft of National Register of Citizens (NRC) in Assam, the coalition partners of the NPP led Meghalaya Democratic Alliance (MDA) have suggested on the need to set up additional infiltration check gates in different parts of the State depending on the need and requirement besides strengthening the existing ones.

"All the MDA partners have suggested on the need to set up additional infiltration check gates as per the requirement," Deputy Chief Minister, Prestone Tynsong told media person after the meeting of the MDA allies here today.

It may be mentioned that this meeting has been convened to deliberate on the prevailing situation in view of the publication of the final draft of NRC in Assam, the fear of migration that griped the state and the growing demand from pressure groups and individuals alike to introduce an NRC like exercise in Meghalaya.

ALSO READ: Meghalaya Govt. open to the idea of NRC like exercise in state

Tynsong also informed that all the partners have also called upon the need to revisit the Meghalaya Residents Safety and Security Act, 2016.

"We are committed to see that the existing Act is further strengthened," the Deputy Chief Minister said. Meanwhile, Urban Affairs Minister, Hamlet Dohling said that the Government has already directed the DCs, SPs and O/Cs to be more vigilant.

Meanwhile, Dohling said that all the allies have unanimously decided to support the candidature of Sangma for the South Tura by election.

"We would like to see the CM win from South Tura," the Urban Affairs Minister said.

The PDF minister, however, said that the party supports its own candidate, PN Syiem in Ranikor bye election. While defending the decision of the coalition partners to put a candidate in Ranikor, Deputy Chief Minister said that real democracy is being practice in Meghalaya.

Tynsong said that the coalition partners are united to rally behind the Chief Minister in South Tura.