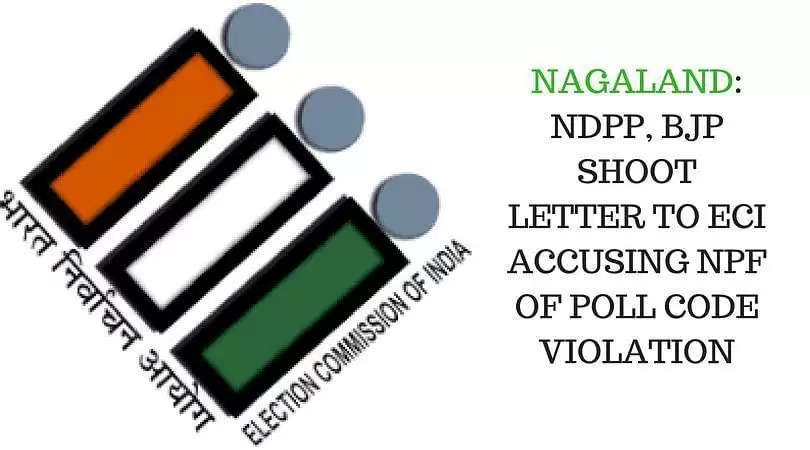 The Nationalist Democratic Progressive Party (NDPP) and the Bharatiya Janata Party (BJP), the two coalition partners of the PDA government in Nagaland lodged a complaint with the Election Commission of India against the opposition party, the Naga People's Front (NPF) for alleged violation of the model code of conduct.

In its letter submitted to the Chief Election Commissioner, Election Commission of India (ECI) dated May 19, the NDPP Election Agent, Prasielie Pienyu alleged the NPF president Dr Shurhozelie Leizietsu for violating the poll code of conduct by indulging in communal inflammatory speeches.

Similarly, the BJP had on May 22 lodged a complaint with the Chief Electoral Officer, Kohima, Nagaland against the NPF Chief on the same ground. Both the letters carry the same content with a request to take strict actions against the NPF president as per the laws.

It may be mentioned that the ECI had on April announced  that by-polls to four Lok Sabha seats, including Nagaland, will be held on May 28. The Nagaland seat fell vacant when Neiphiu Rio, who was elected as Member of Parliament in the Lok Sabha as a Naga People's Front (NPF) candidate, resigned on Feb. 16 after he decided to return to state politics. Subsequently, Rio became the chief minister of the state as a candidate of the NDPP.

According to the letters, the inflammatory speeches were made by the NPF president on May 15 at Ura Academy Hall, Kohima during a party campaign for the upcoming LS bypoll wherein he was reported as making statements like — minorities across the country including Christians were being persecuted by RSS, of which the BJP was a political wing. He further said it was time to speak the truth that if one was to become Hindu, they can vote for PDA's candidate Tokheho Yepthomi. But if the people want to vote for the Nagas, for secularism and for the Christian faith, they should vote for Jamir.

"The deviation shown by Dr Shurhozelie Leizietsu, none other than the president of NPF, from the path of decency may result in violent clashes and street fights, vitiating the atmosphere of free, fair, smooth and peaceful election unless such tendencies are curtailed from the very beginning by the commission," read the letters.

Stating that the 'inflammatory' and 'communal' speech of the NPF chief is a clear violation of the model code of conduct, the NDPP and BJP requested the ECI to step in and direct the state government to file an FIR against Dr Shurhozelie Leizietsu and criminal proceedings initiated against the leader.

Furthermore, they urged the ECI to direct the state government/district administration that no permission should be granted for holding any public meetings, public processions, public rallies, road shows, etc, where Dr Shurhozelie is expected or likely to participate.

They have also requested the ECI to direct the concern authorities to take all preventive measures against Dr Shurhozelie under the relevant provisions of the law to "ensure that no act of commission or omission was resorted to by them which may have the effect of prejudicially affecting the public tranquility and law and order."

In another similar case, the NDPP had submitted a complaint letter to the ECI dated May 22 against the NPF candidate in the ensuing parliamentary election, C Apok Jamir accusing him of violating the model code of conducting by distributing Mithun, which according to them is a sanctified and revered animal among the Nagas.

In its letter, the NDPP observed that the act of distributing Mithun during the course of election is a clear violation of the model code of Conduct and also in violation of Section 171 (B) and 171 (E) of the IPC.

"Being a clear case of violation of election code of conduct and other provision of the law, the Election Commission is requested to take cognizance of the offences committed by the candidate immediately and necessary action may be initiated and disqualify the said candidate," said NDPP general secretary Benjamin Lorin.