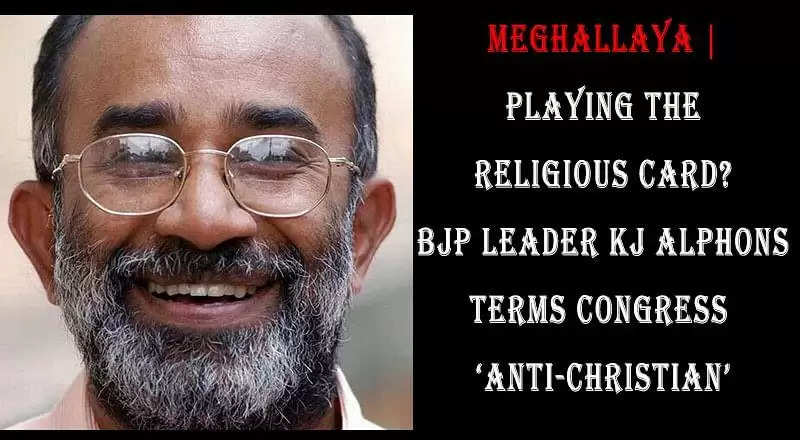 Shillong, October 26, 2017: Continuing with its mission to free the Northeastern region from the Congress regime, the BJP today shifted from  playing its usual game — Developmental card and place it on the deck — a Religious card.

Determined to dethrone the congress from Meghalaya, the BJP fired yet another salvo at the congress in Meghalaya by terming the party as 'Anti-Christian'.

Union Minister for tourism K. J.  Alphons today lashed at chief minister Mukul Sangma and his cabinet colleagues calling the Congress anti-Christians.  "The people from Meghalaya should not vote for them (Congress) and they should dethrone the Congress led government in Meghalaya and elect an honest government in the state," Alphons said.

Addressing a public meeting of the party at Sohra,  he outlined the work carried out by the Narendra Modi led government and said that if BJP government comes to power in Meghalaya, it will usher in development which will benefit the people of the state.

Categorically lashing out at chief minister Mukul Sangma and his cabinet colleagues, Alphons said Congress is anti-Christians and hence people from Meghalaya should not vote for them.

He also said that if elected to power the BJP government will develop Sohra, Cherapunjee and whole of Meghalaya as the most attractive tourist destination in the country.

Addressing the gathering, National spokesperson of the Bharatiya Janta Party and incharge of the party in Meghalaya Nalin Kohli today said that his party wants the development come to the north east which he said is 'dear' to the government at the Centre.

Kohli said development of whole of north east has started under the leadership of Prime Minister Narendra Modi.

He also claimed that more than 200 times Union ministers have visited Meghalaya in last 3 and a half year.