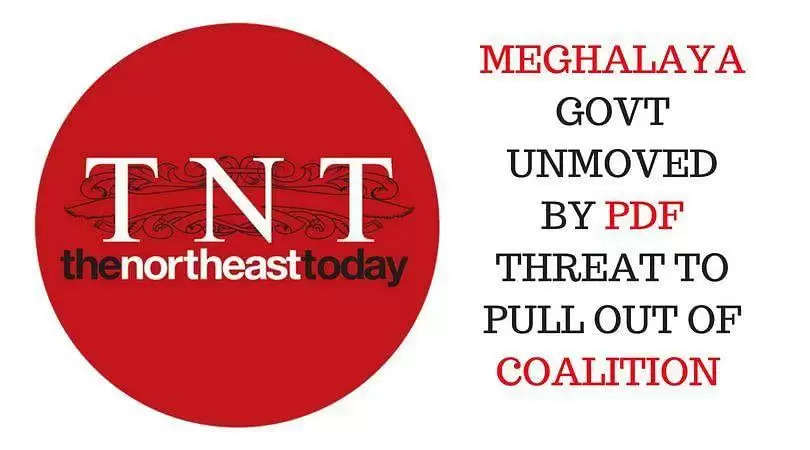 The proposed move of the People's Democratic Front (PDF) to pull out of the NPP-led MDA government in Meghalaya will not have any impact on the coalition, said Deputy Chief Minister, Prestone Tynsong.

"Even if the four PDF MLAs withdraw their support, there is no threat to the present Government. We still have the support of 34 MLAs," Deputy Chief Minister told media persons here today.

"The only plus points from the decision of the PDF to withdraw its support is that Congress will get 24 MLAs," he said.

When asked if his statement will evoke response from PDF, he said that he is not asking the PDF to pull out from the Government.

"We are leaving to their wisdom. But we cannot prevent them if they have already made up their mind to pull out from this Government," Tynsong said.

Earlier, the PDF had threatened to pull out of the NPP-led MDA coalition after four NPP MDCs decided to withdraw support to the People's Democratic Alliance (PDA) in the KHADC.

Four PDF legislators – Hamlet Dohling, Banteidor Lyngdoh, Jason Sawkmie Mawlong and Gavin Miguel Mylliem – are part of the MDA government and two among them, Hamlet and Banteidor, are Cabinet ministers.

PDF chairman and spokesperson P.N Syiem had claimed that that the verbal agreement with NPP was that PDF will get two Cabinet berths and the NPP MDCs will support the PDA coalition in KHADC for the reciprocal support of the party to the MDA government.

"However, the four NPP MDCs are planning to withdraw support to the PDA coalition and in this context, we will have to consider withdrawing support to MDA," Syiem had stated.

On the claimed of Syiem on the verbal agreement, Tynsong said that there is no such agreement as far as his knowledge goes.

He also recalled that he (PN Syiem) had announced that he will resigned from the post of the CEM weeks after the formation of the NPP led MDA Government in the State.