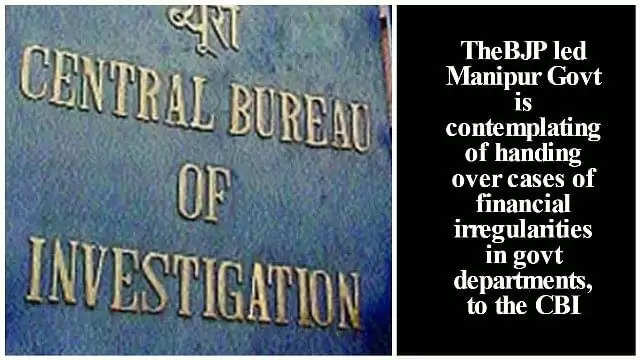 IMPHAL, May 4 2017: In a bid to weed out corruption, Manipur chief minister Nongthombam Biren Singh is contemplating to hand over cases of financial irregularities in various government departments to the Central Bureau of Investigation (CBI).

The state government has already asked the CBI to probe into such cases in the Manipur Development Society (MDS).

In their hectic poll campaigns, BJP leaders had promised to probe into various scams that took place during the Okram Ibobi Singh government's 15-year tenure.

The state cabinet, while deciding to restructure the MDS last Friday, had resolved to hand over the cases relating to irregularities in accounts of MDS to the CBI. The newly installed BJP-led coalition government has already set up an anti-corruption cell at the chief minister's secretariat.

"I am sending out a clear message to the people that my government will be free of corruption," Biren said. He added that similar steps will be taken up against other departments after getting prima facie evidence of corruption.

He added, "For other departments, we need prima facie evidence so that we can forward such cases to the CBI." The chief minister said no clemency will be shown in taking up similar measures against Congress MLAs who joined BJP.

On the MDS issue, the chief minister said he had tried to trace some of the accounts involved in development projects taken up by it many times but could not obtain much details. "I then repeatedly instructed my chief secretary and principal secretary but could not find the correct figures," added Biren.

As some cases of misuses and diversion of funds from one unit to another without taking proper acceptance from the authorities have been detected in the MDS , the state government has decided to hand over the case to the CBI , Biren said. "We have given a blanket order to investigate and book whoever is involved in the MDS scam," the CM added.