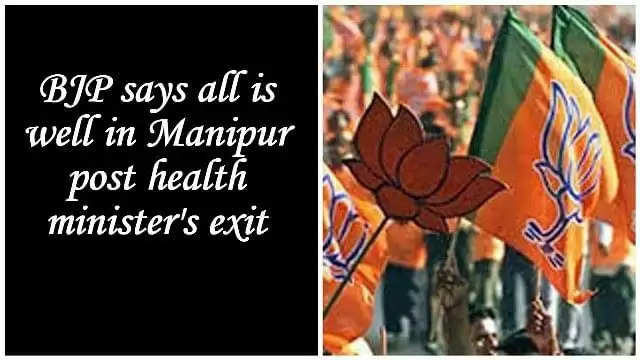 IMPHAL, April 17: Speculations run high in Manipur with the recent exit of Health Minister L Jayantakumar Singh from the one month old BJP-led ministry in the state.

While the current political scenario seems shaky and unstable to a layman's eye, the ruling party has however dismissed such speculations stating that all is well in the state's coalition government.

According to state BJP general secretary N Nimbus Singh, the chief minister has almost resolved the matter and there are no differences among the coalition partners in the government. Things are going smoothly,

Jayantakumar had tendered his resignation to Biren on Thursday, citing "interference" with his authority as a minister. The final decision on the resignation will be made public after Biren returns here from the BJP national executive meet at Bhubaneswar, Jayantakumar said. "A clearer picture will then emerge," he added. Jayantakumar had, in fact, attended a health directorate-sponsored capping ceremony for female health workers as health minister at Lamphelpat on Saturday.

The MLA from Keishamthong holds the health, CADA, art and culture, and law portfolios. "I have been taking the pain of building certain visions for the portfolios assigned to me," he wrote in the resignation letter, which was made available to the media on Friday night and went viral on social media. He added that there had been too much "interference" in his authority and position as a minister.
His resignation follows the suspension of state health mission director Okram Ibomcha Singh on Thursday. Ibomcha is a close relative of former Congress chief minister Okram Ibobi Singh.
Jayantakumar's exit could have serious implications for the month-old coalition government in the state. BJP, which got 21 seats as opposed to Congress's 28, managed to form the government only with support from four MLAs from NPP and NPF each, one MLA each from Trinamool Congress and Lok Janshakti Party, an Independent and a Congress legislator who defected to BJP. The saffron party had given cabinet berths to all four NPP legislators, including the post of deputy chief minister.
TNT News with inputs from Time of India