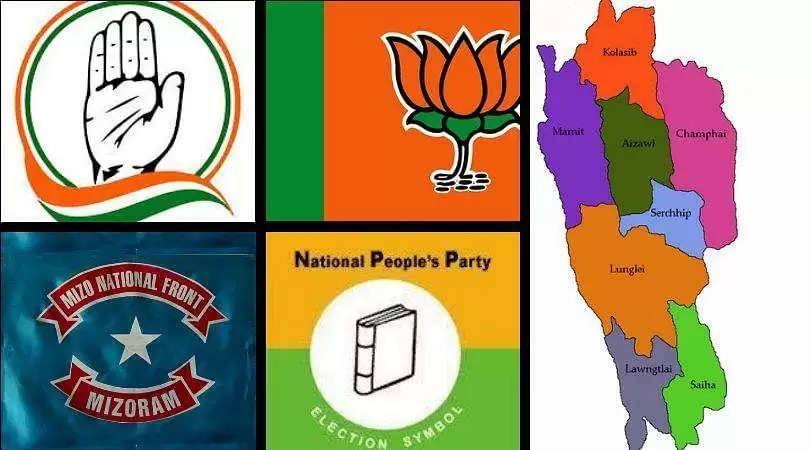 With almost a month left for Mizoram to go to polls on November 28, political parties in the state are all geared up to give a tough fight with non-Congress parties expressing determination to "rid" the last Congress-ruled state in Northeast India of its dominion.

While the Congress candidates' list is set to be announced on Wednesday, the BJP is, however, awaiting the approval of the party high command even as they maintained that most of the party's activities will be made known only after the visit of BJP national president, Amit Shah to Aizawl on October 17.

Informing this, a party source said that the preparation for the poll battle is underway but the nitty-gritty of the whole process will be clear only after the visit of Amit Shah.

It may be mentioned that recently, BJP Mizoram state incharge, Pawan Sharma had stated that the party has already strengthen its base in the state and everything is going well.

He had also expressed optimism over the party's prospects despite the decision of its ally in the NDA and NEDA — the National People's Party (NPP) to go solo in the Assembly elections in the state.

When asked whether the NPP's decision will divide the anti-Congress votes in the state, Sharma replied in the negative stating that the decision will not affect the BJP as its presence is already felt and it is doing well in the state.

Meanwhile, the National People's Party (NPP), a party which was recently launched in the state by Meghalaya Chief Minister and NPP national president, Conrad K Sangma is all set to pose a challenge to the Congress in its last bastion in the region.

Speaking to TNT-The Northeast Today, NPP national general secretary, Vivekraj Wangkhem informed that the party is targeting at least 14-15 seats in the House of 40 while asserting the party's stand on pre-poll alliance.

"We are not going for any pre-poll alliance in Mizoram but we are open for consideration in the case of post-poll alliance," said Wangkhem.

ALSO READ | "We are confident that people of Mizoram will accept NPP," says Meghalaya CM

When asked whether this decision to go solo will divide the anti-Congress votes in the state, the NPP leader said "It is difficult to say; in as far as division of votes is concerned, that is an analytical observation."

Replying to a query on the date scheduled to announce the candidates' list, Wangkhem said that they are presently in the process of finalizing the candidates.

Reacting to speculations on political leaders joining the party ahead of the poll, the NPP general secretary said "Lots of people are speaking to us and established politicians have approached the party because they agree with our ideologies."

Mizoram is the only state under the Congress at present and hence it would be important to see whether they manage to hold the fort or not.

Meanwhile, sources in the ruling party said that massive tussle has been going inside the party over selection of candidates in the election to the 40-member state legislature to be held on November 28.

One leader said that the party top leadership wanted to axe some legislators who were too old or did not chance to win while taking great care to ensure that those left out would not be too numerous to form a rebellious lobby against the party.

The heartburns might widen the cracks which had already inflicted a blow especially after the resignation of home minister R. Lalzirliana and former minister and sitting legislator Lalrinliana Sailo recently.

To address the challenge, the Grand Old Party is determined to change the strategy by inducting new faces and it is looking forward to field at least 10 to 12 new and young faces in place of its sitting MLAs as party candidates.

Meanwhile, the Mizo National Front (MNF) is determined to make a comeback after 10 years. The exodus of leaders from the Congress party will likely improve its chances in the upcoming polls, said a party leader adding that the strong wind is blowing in favour of the MNF and not the BJP, as assumed.