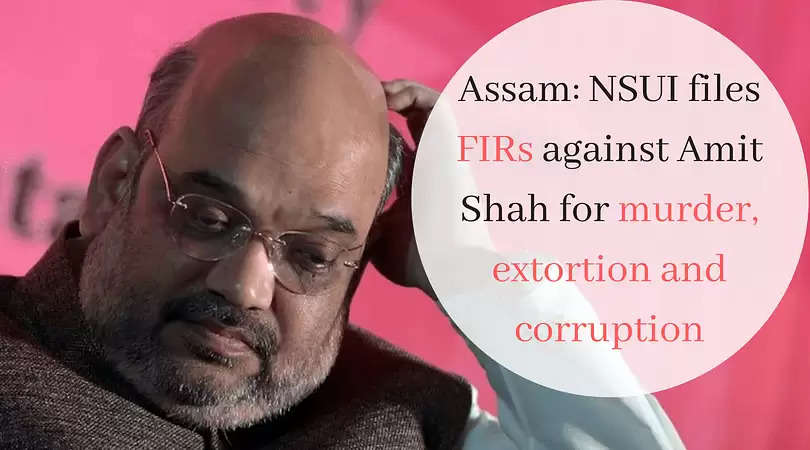 National Students' Union of India (NSUI) of Assam unit, the students' wing of the Congress, on Tuesday had filed an FIR against BJP president Amit Shah at Bhangagarh police station, demanding his arrest on the charges of murder, extortion and corruption.

The Morigaon, Kamrup (metro), Kamrup (rural), Hojai, Nagaon and Nalbari district units of the NSUI assembled at Rajiv Bhawan, the Congress headquarters, here and put their signatures on the FIR. They also burnt Shah's effigy.

The Goalpara, Dibrugarh and Barak Valley units of the NSUI, however, filed separate FIRs in their respective districts.

All the FIRs refer to the encounter killing of Sohrabuddin Sheikh on November 26, 2005, allegedly at the behest of Shah who was then the home minister of the Gujarat government. Shah is alleged to have directed then Gujarat deputy inspector-general of police D.G. Vanzara to orchestrate the killing.

The FIRs also accuse Shah of violating personal space and privacy" of a woman architect in Gujarat allegedly at the behest of then chief minister Narendra Modi.

The FIRs blame Shah for the death of Justice Brijgopal Harikrishna Loya who was presiding over the special CBI court trying the case of Sohrabuddin, on December 1, 2014.

The NSUI also accused Shah of depositing black money amounting to Rs 745.59 crore at the Ahmedabad District Cooperative Bank where he was the director.

NSUI state president Rakesh Das told the media, "Amit Shah ji's bank account has Rs 750 crore. As a people's representative he is answerable to them. So, we wanted to know the source of his hefty income, but he failed to answer. His son Jay Shah's company prospered in one year. We want to know the truth behind all these."