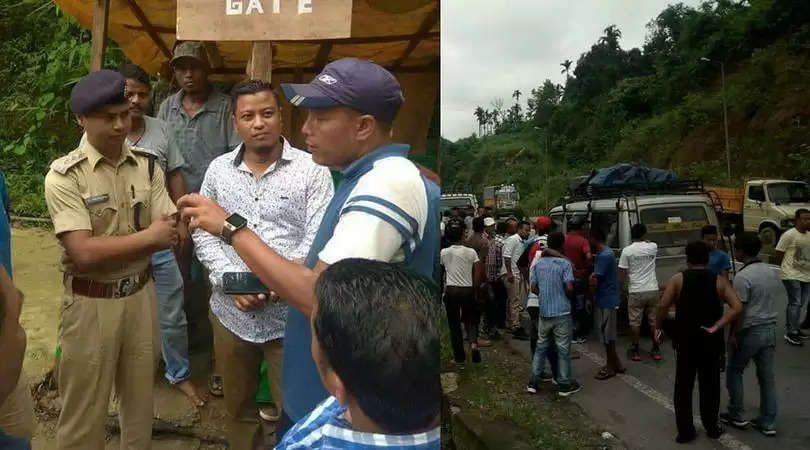 The announcement of the NRC draft list in Assam on July 30 has given Meghalaya all the more reasons to worry lest there be any spillover into the state.

While the prominent student body in Meghalaya, the Khasi Students' Union (KSU) had claimed that over 1600 'illegal immigrants' were held from various check posts in the state on July 31, the State Police's tally, however, stands at 35 so far.

Chief Minister Conrad Sangma had on Wednesday stated that the Government has taken several measures to keep a check on the entry of illegal immigrants into the State.

"We are alert and aware of the situation which has evolved due after the publication of NRC Draft in Assam. I have been personally monitoring the situation in the past three days," Chief Minister told media persons yesterday.

In East Jaintia Hills, the Police have detected 29 people from two check posts in Ratacherra and Lumshnong check posts, who were planning to come to Meghalaya without valid documents to prove their nationality.

"Intensive checking is going on in these two check posts in the district. The usual procedure was followed — EPIC and other documents were sought to prove their citizenship, nationality and those who were caught without the possession of such documents were asked to go back," said EJH SP S Nongtnger.

The district police chief also stated that they are closely monitoring the check posts and since July 31, high-ranking officers have been deputed alongside the magistrates to oversee the work. Nongtnger also informed that at present, 20 personnel are being placed at Ratacherra and 10 at Lumshnong.

Meanwhile, the SP has also clarified that strict rules and procedures were followed while conducting the checking and asserted that only those people who failed to provide their documents were asked to return to where they came from.

It may be reminded that Assam MP from Silchar, Sushmita Dev on Wednesday alleged the Meghalaya police and KSU of high handedness and restricting the movement of many people from her constituency at the interstate border while also accusing members of the student body of beating some of them.

The KSU, however, denied having any role in beating up people, hailing from the other side of the fence, and on their way to Meghalaya while also firing back at the Silchar MP, asking her to 'check her facts before leveling charges'.

Meanwhile, in Ri Bhoi, the district police have, so far, managed to detect only 6 'immigrants' who failed to produce their documents. The six were held at Byrnihat Check Post and were sent back.

In Garo Hills, the Garo Students' Union (GSU) have claimed that 5 individuals were held at Rongjeng in East Garo Hills on Wednesday. The five people, who failed to prove their nationality, were sent back.

"We are alert, the people are alert and we are of the view that anybody who comes to Garo Hills from Assam, with an intention to carry out usual businesses and trade, should first get their names featured in the NRC list otherwise, we will not allow entry of any individual just like that," said GSU president Tengsak Momin.

And like the KSU, the GSU has also demanded the state government to introduce and implement NRC-like exercise in Meghalaya to identify the genuine from non-genuine citizens of the state with a cut off year being 1971.

The KSU had on Wednesday submitted a proposal to Deputy Chief Minister, Prestone Tynsong, suggesting the government to adopt a similar kind of exercise like the NRC even in Meghalaya. "The Dy CM has not given any assurance but said that this matter will be taken up in the cabinet for further discussion," said KSU president Lambok Marngar.

Meanwhile, West Garo Hills Deputy Commissioner Ram Singh has informed that so far, the district administration and district police have not detected any entry of immigrants into the state via WGH.

"Nothing has been reported so far but we are very alert; we have set up check posts at several places and several meetings were held with traditional heads, seeking their support in the exercise while urging them to report to the police if any such case is being reported and not to take the law into their own hands," Singh said.