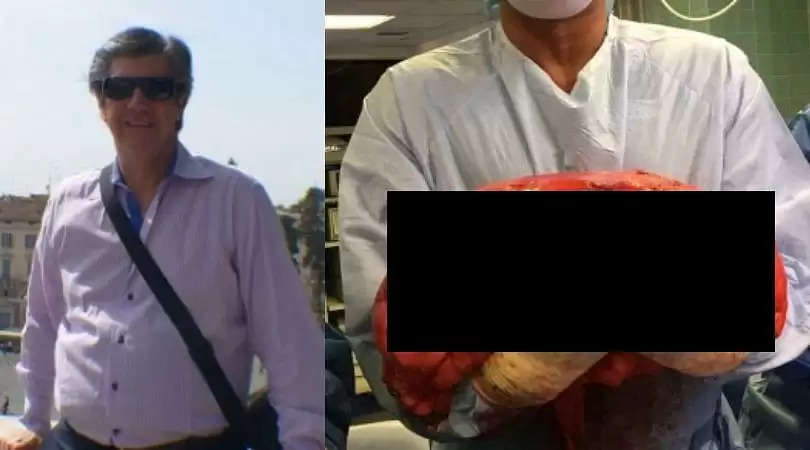 While one may not consider changes in the body a big deal, sometimes these may turn out to be much more serious. Cases including that of an ovarian tumour growing inside a pregnant woman have been reported in the past.

A man who thought he had a beer belly actually had a 30-pound cancerous tumor growing in his abdomen.

Kevin Daly knew something was wrong when he lost 34 pounds but his pot belly hung around.

In December, the 63-year-old convinced his doctor to do a CAT scan, which revealed the beach ball-size tumor.

The financial planner, from Hoboken, New Jersey, was diagnosed with liposarcoma — a cancer that develops in the fat cells of soft tissue.

The cancer often looks like fatty tissue when looked at under the microscope, making it difficult to diagnose.

If Daly had not convinced his doctor to do a CAT scan, he may not have survived.

Daly lost weight after open heart surgery in 2015, but when his stomach didn't deflate, he and his wife, Rachelle, wondered if something else was causing his problems.

"I thought they literally left stuffing and tools in me from surgery," Daly told the New York Daily News.

Daly convinced Dr. Varinder Singh at Lenox Hill Hospital in Manhattan to perform a CAT scan, despite the objections of his insurance provider.

During surgery to remove the tumor, doctors discovered it was nearly triple the size they originally thought and that it had wrapped around one of Daly's kidneys.

It was the largest tumor that doctors at the hospital had ever removed.

"It's one thing to see the picture. It's another thing to actually have it in your hands," said Daly's surgeon, Dr. Julio Teixeira.

Modal Trigger Daly after his surgeryCourtesy of Kevin Daly Doctors believe it took 10 to 15 years for Daly's tumor to grow to the size it did. And he was lucky the tumor did not cause anything in his body to fail.

Now, after the surgery, Daly's beer belly is gone and his organs have returned to their usual position.

"Before the surgery, my left descending colon was pushed under my sternum. I could touch it through my skin to make my food digest," he said.

Liposarcoma develops from fat cells from anywhere in the body but is more common in the abdomen and limbs.

The tumor itself looks like fatty tissue but it is often diagnosed early because it causes other parts of the body to fail.

In Daly's case, the tumor grew to a larger than normal size because it did not cause any other symptoms in his body, making it difficult for doctors to detect.

The exact cause of liposarcoma is not known, but it is believed to be related to mutations in fat cells.