India says no to foreign aid for flood-wrecked Kerala: Five things to know 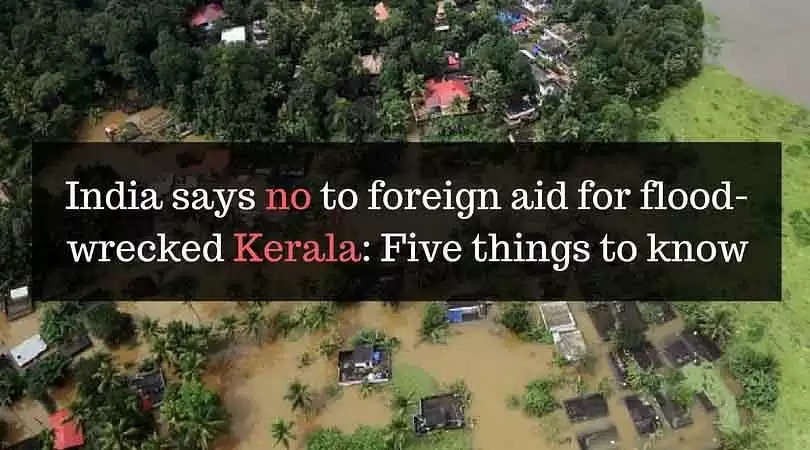 India will not accept financial assistance from other countries for flood-wrecked Kerala, the government clarified on Tuesday in a stance that could escalate a row with the state over help from abroad.

"In line with existing policy, the government of India is committed to meeting the requirements for relief and rehabilitation through domestic efforts," the foreign ministry said in a statement last night on the Kerala flood.

The floods in Kerala, the worst in a century, have killed over 237 since August 8. Despite pleads from the Kerala government to accept the aids offered up by other countries, India still refuses to accept any. Here are five things to know about the decision:

1. The dispute between Kerala and the central government over whether to accept foreign aid intensified after a reported offer of Rs. 700 crore from the United Arab Emirates. Reports say Qatar and Maldives have also offered to help Kerala recover from the devastating floods.

2. While declining aid for Kerala floods, the government expressed "sincere appreciation" to nations and said: "Contributions to PM relief fund and CM relief fund from NRIs, PIOs and international entities such as foundations would, however, be welcome."

3. Kerala minister Thomas Isaac's tweet last night made his dismay clear. "We asked Union Gov for financial support of ₹2200 Cr ; they grant us a precious ₹600 Cr . We make no request to any foreign gov but UAE gov voluntarily offer ₹700cr. No, says Union gov , it is below our dignity to accept foreign aid. This is a dog in the manger policy," he tweeted. He says the National Disaster Management Plan allows the centre to accept assistance offered by a foreign government.

4. The government has also refused help from Thailand, the country's envoy said on Wednesday."Informally informed with regret that GOI is not accepting overseas donations for Kerala flood relief. Our hearts are with you the people of Bharat," tweeted Thailand's ambassador to India, Chutintorn Sam Gongsakdi.

5. "Rules should be such (that they) eradicate the sufferings of the people. If there exist any obstacle against the acceptance of foreign aid, kindly look into the matter seriously and bring suitable modifications,"Congress leader and former Kerala Chief Minister Oommen Chandy wrote in a public letter to the Prime Minister.