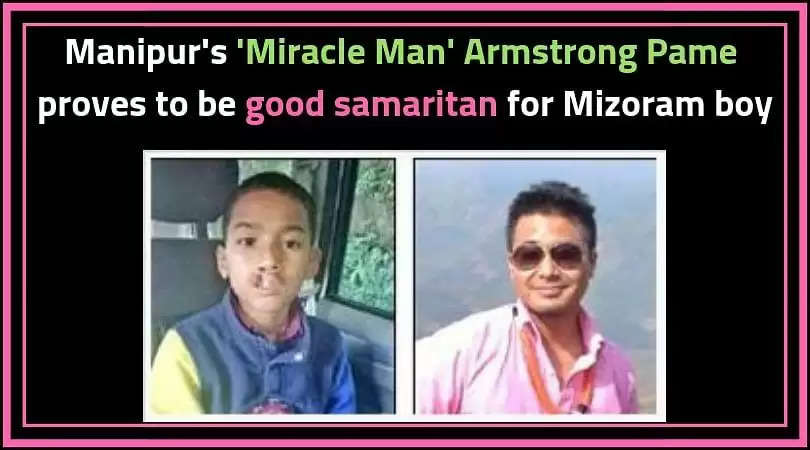 IAS officer from Manipur, Armstrong Pame who has earned the title of "Miracle Man" for the good work he has done has now proved to be a good samaritan for a poor boy with cleft lip in remote southern Mizoram where Pame was appointed as an Election Observer on November 28 on the day of Mizoram polls.

Pame was one of the Observers appointed for Lunglei district and during his official tour, he visited a remote village Zehtet where he came across an 11-year-old boy by the name of Lalrindika with a cleft palate.

Having known by the time that the boy hailed from a poor background and that he could not afford any surgery, Pame made arrangement for the boy to undergo surgery at Shija Hospital in Imphal, Manipur's capital. He paid the boy's father money for him and his child to travel from their village to Lunglei. From Lunglei, he let the duo to travel in his official vehicle to Aizawl. From Aizawl, he sent them to Churachandpur town in southern Manipur at his own expense. From Churachandpur, Pame's team received the boy and his father and brought them to Imphal. Besides the travel expenses, all the medical bills will be paid by Pame.

"It is a miracle done to us by God through this kind-hearted IAS officer. I thank God that he sent this man to us," Lalrindika's father Vanlalsiama said to the Assam Tribune.

Pame, who hailed from Tamenglong district in Manipur, shot to fame when he got a 100 km stretch of road constructed in the State in 2012, without any help from the government. He achieved this ambitious project through public funding after he was denied funds by the State Government.

Since then, Armstrong has kept busy with his many initiatives, a recent being when he decided to invite 10 students from fifth to tenth standard for dinner every week to give them a glimpse in the life of an IAS officer.

In 2012, Armstrong was nominated for the CNN-IBN Indian of the Year Award in the Public Service Category. He was conferred with India's Most Eminent IAS Officer Award in 2015.

Currently, Pame is a district collector in Tamenglong district in Manipur.

During his time as an election observer in Mizoram, he made interesting observation about the unique style of rlrctions in the state and how other Indian states should take Mizoram election as a model for themselves.