This IAS officer beats Shillong traffic by cycling to the office 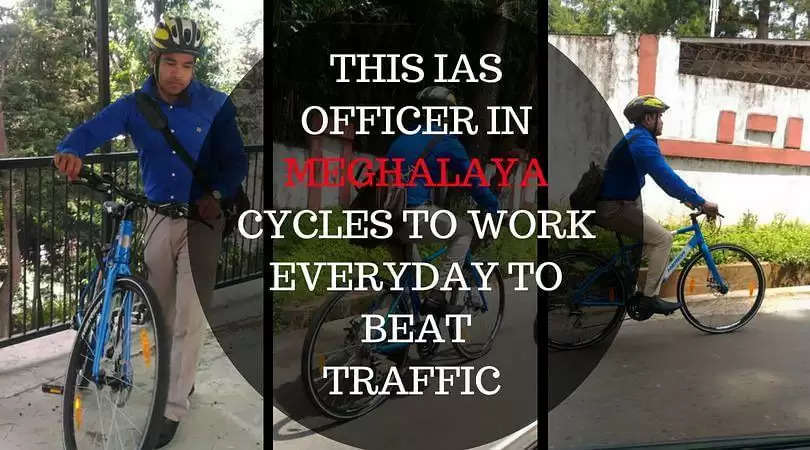 SHILLONG: From West Jaintia Hills and West Khasi Hills to Shillong, this IAS officer from Karnataka has earned quite a name for himself in Meghalaya and has earned the title of — The ‘People’s Deputy Commissioner’.

Some orate their way to popularity, others by exhibiting their talents, but few find appreciation in the hearts of the people by doing what they do best — Being Humble.

Arunkumar Kembhavi is a household name in Meghalaya thanks to his people-friendly, unique and out-of-the-box ideas and initiatives to facilitate change in society. Though he no longer serves as the DC of either WKH or WJH, he is, however, still known to the people of those districts as The People’s DC.

We may note that Kembhavi gained popularity for the Wall of Kindness (the first in the region), building roads with shredded plastic waste, the green office, online administrative system, GPS tracking software for election monitoring (the 1st in the whole country) and other initiatives.

RELATED NEWS: Five bureaucrats who made a difference in Northeast India in 2017

Soon after transferring to Shillong as the Registrar of the Cooperative Societies and Director of the Community and Rural Development, Kembhavi made his mark with an approach that got many officers and staff members of the Secretariat talking.

Shillong is a pleasant city, but not when one has to commute in a vehicle. And Yes! Shillong traffic was the same nightmare, Kembhavi faced when he arrived in the capital city.

It didn’t take long for the young and vibrant officer to come up with an alternate solution to beat Shillong traffic and reach the office on time.

And his first preference was cycling to work.

“After I joined secretariat last week, the first thing I did was I bought myself a cycle because I don’t want to experience the problematic nature of traffic,” Kembhavi said.

Kembhavi felt that since the commuting distance from his residence to the Secretariat is only a few clicks away, it seemed pointless for him to drive through traffic in an automobile.

“Shillong city is slowly becoming unlivable now, and there is a need to regain the past glory of this city. Traffic is the key problem. I think we can all emulate other countries’ way of dealing with the problem — cycle to work,” he said.

The decision to cycle to work didn’t seem to bother him at all, with the only challenges being the roads and complete absence of bicycle paths.

“The roads here in the city are not conducive to ride a bike. And since this is more or less a new concept, there is always a fear of being hit by a rash driver,” he said.

“However, it is encouraging to see the attitude of the traffic police towards cyclists as they would always give way and let them through amid the chaos.”

“For me, cycling is not a mean of staying fit, rather, it is a functional necessity to beat traffic,” he said, adding that he spends the time saved from waiting and getting annoyed in traffic on more resourceful things.

Kembhavi also stated that the reactions he received from his colleagues are quite encouraging.

The intentions expressed by some officers to ‘maybe’ follow suit are encouraging, but there is a slight disadvantage as the city roads do not have a cycling track to protect and restrain the cyclists, he said.

“Meghalaya has a good cycling club led by Abhishek Bhagotia (another IAS officer) called Cycling Shillong. I think through this club, we can encourage people to consider cycling as it is a more convenient mode of transportation within the periphery of the city,” he said.

Stating that the number of cyclists in Shillong has increased, if not remarkably, Kembhavi said that youths are now beginning to follow the cycling trend.

It is necessary to dedicate a lane for cycling in the roads of Shillong, he said.

Though the perks attached with cycling include fitness and saving valuable time, there is, however, a side-effect of cycling in the streets of Shillong and that is the pollution emitted from vehicles daily.

“The poisonous gas emitted by vehicles every day is a bane for us, and it deters us from achieving our objectives of staying healthy and fit. If only we can replace 100 cars with bicycles in the city, it would have proved beneficially not only physically but also environmentally. I don’t see any reason people shouldn’t take up cycling,” he said.